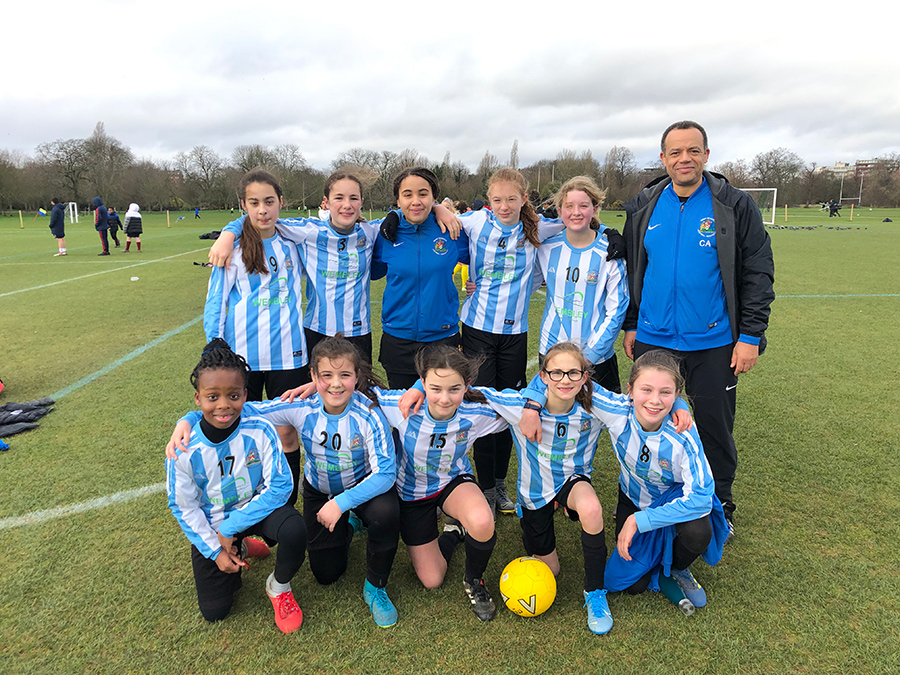 Brent U13 Girls resumed their campaign after the Christmas break and started 2020 in style, achieving a resounding 4-0 victory against local rivals Queens Park Sharks.

The game was closer than the scoreline might suggest, but Brent were able to complete a League 'double' over Sharks.

The opening goal came from a well-worked set piece, straight off the training ground. Ugomma Ekendu Obi cut the ball back to Sophie Kew who who drove the ball toward goal. Striker Scout Waddington made a glancing header which the Sharks keeper saved spectacularly but Waddington made no mistake, shooting the rebound into the net.

Buoyed by the goal, Brent stepped up a gear and got their passing game going. Elizabeth Ulusele found Keely Dibley-Dias and her superb pass released Waddington to launch a thunderbolt into the bottom corner, doubling her team's advantage.

Waddington completed her hat-trick after neat passing by Maddie Muir and Maya Rosenberg who slipped the ball through to Waddington inside the penalty box and she shot past the keeper for 3-0.

The second half started at a frenetic pace. The Sharks fought hard to get back into the game and only a great save by Millie May Blue kept them at bay. Now playing into a strong wind, Brent began to get the ball wide early. Dibley-Dias released Kathleen Ferreria who switched the ball inside to Apolonia Margetson. Margetson raced into the box past two defenders and Waddington showed a poacher's instinct stepping in to blast the ball into the net and make it 4-0.

Brent coach Chris Ampofo  observed afterwards: "I congratulated the girls on a brilliant performance. They really work hard for each other. Some of the passing and movement was fantastic."

The U13 Girls next face Little Stars Coaching on 25 January at Regents Park.

The Under-11 girls also had a convincing 6-0 win against Dragons.

The Brent U13 boys squad put in a strong performance but could not convert their chances and eventually down 5-1 in an exciting Compton Cup game at home to Barnet at Capital City. 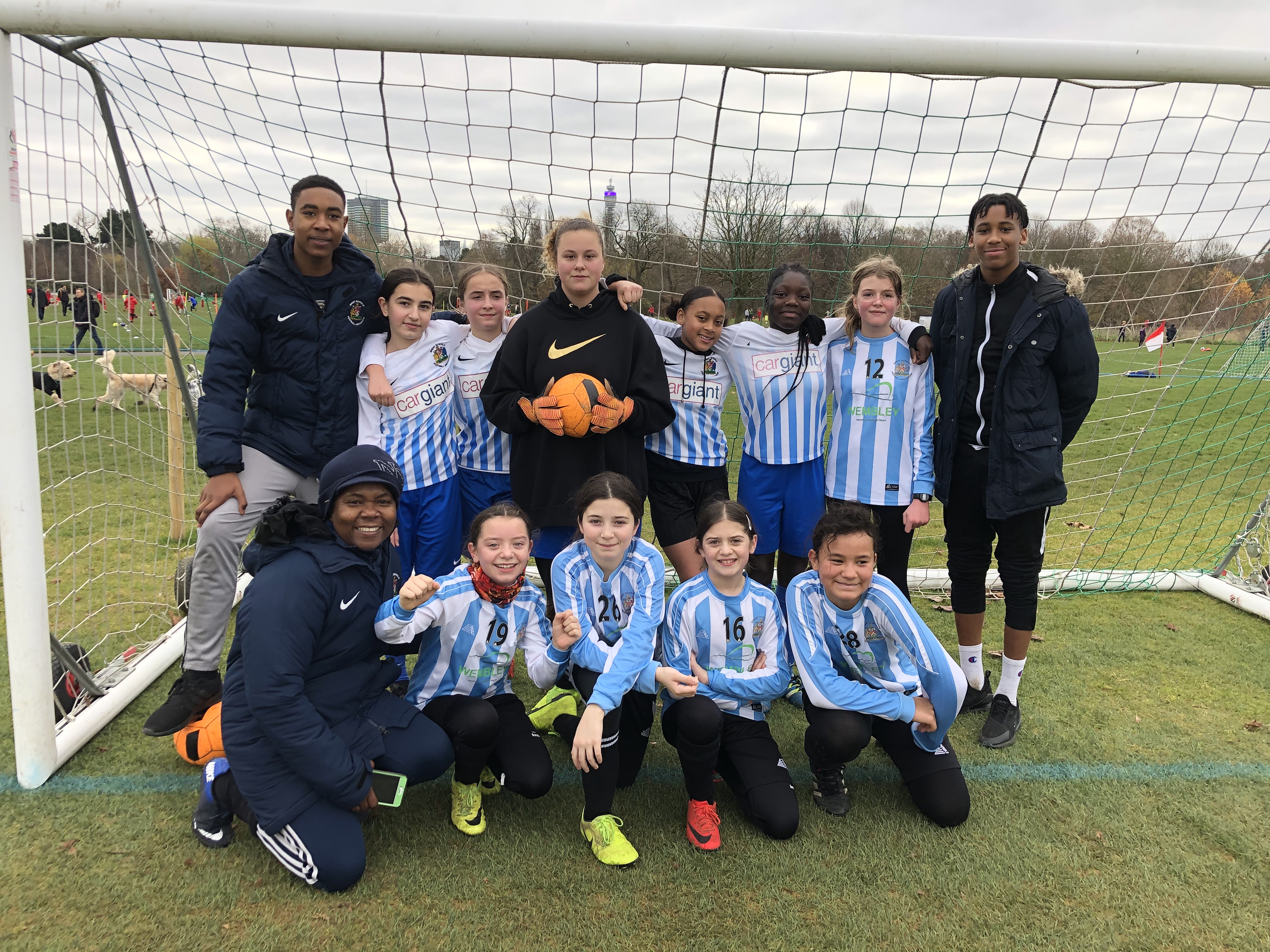 In a fiercely competitive match, the Brent U12 Girls claimed the Regent's Park League 'bragging rights' with a 2-0 victory over the U13 side.

The match was end-to-end from the start, with the Under-13 team deploying a possesion-based passing style with the younger Brent side adopting a more direct approach.

Just before half-time, Olivia Henry from Brent U12 broke free down the right hand side. It looked as though a heavy touch had cost Henry her chance of scoring, but she regained her composure and was able to strike the ball into the bottom left corner of the goal.

That was the final significant action of the first half and Brent U13 began the second half looking to turn the game around.

The intricate passing from Brent U13 caused the U12 team problems but despite dominating possession for long periods and creating several chances, the older girls were unable to find a way to score past the outstanding U12 goalkeeper Emily Danicka.

With the Under-12 defence under enormous pressure, a moment of magic allowed the younger team to hit the Under-13 side on the break and - perhaps against the run of play - double their lead. Gerssa picked out a lovely ball in behind the defence to put Olivia Henry through on goal. Henry had been kept quiet for much of the second half by the Under-13 defence but needed only one opportunity to score and powered a shot into the net at the near post.

Brent Under-13 ramped up the pressure again, with captain Giussepina Carnavale making several mazy runs. On one of these runs, Carnavale dribbled past four defenders before driving the ball goalwards. The shot cannoned off the brilliant Danicka in goal and off the inside of the post. Carnavale turned to celebrate but the goal was not awarded and despite constant pressure from the Under-13s, Brent Under-12 stood firm, defended superbly and clinched a well-deserved win.

U12 Coach Patricia Taylor: "The girls worked very hard against the odds to achieve this win. They played with desire, determination and strength with great team effort. I’m very happy and proud of their performance." 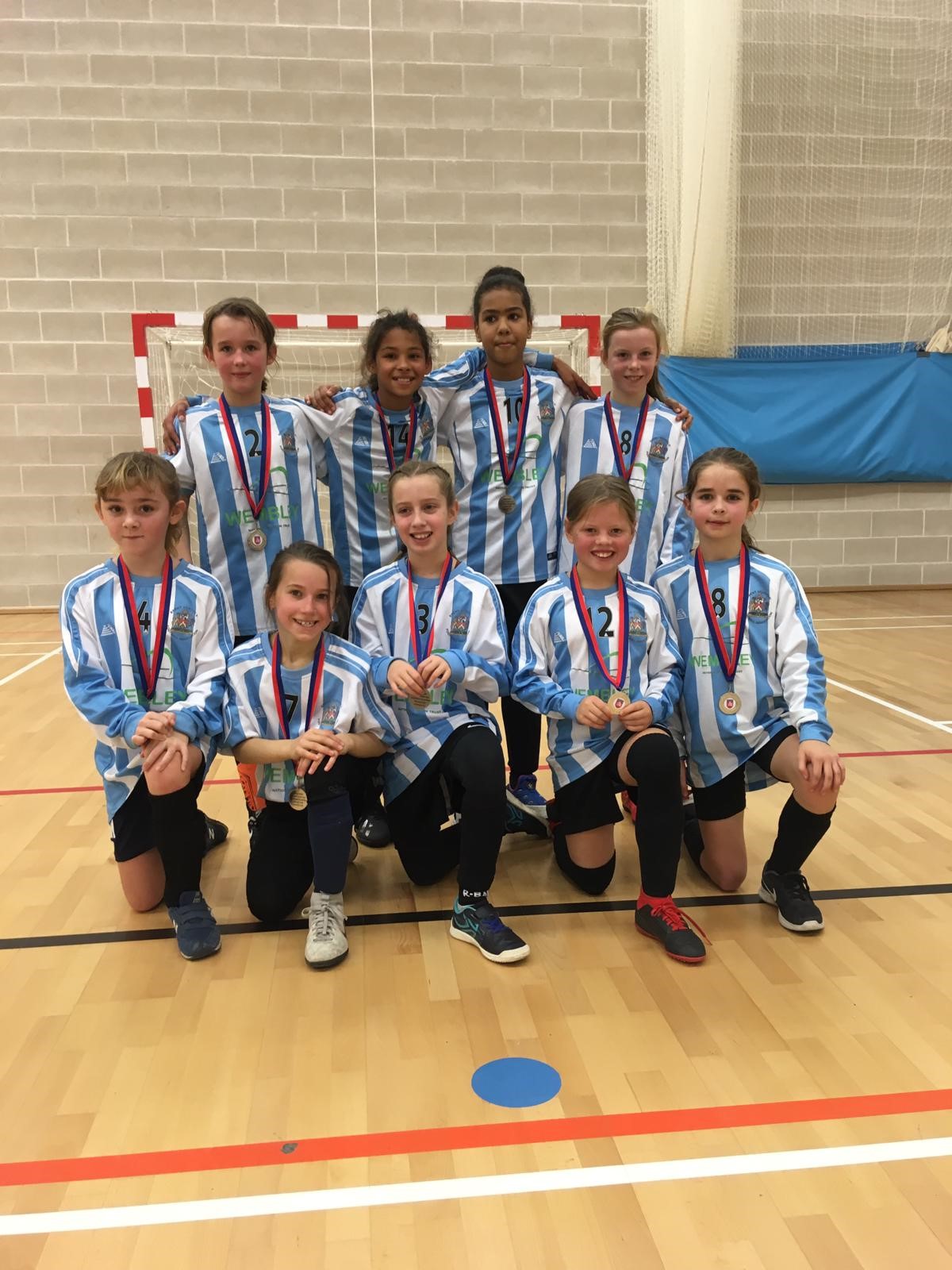 The superb season being enjoyed by the Brent Under-10 Girls squad continued with a silver medal at the Middlesex FA Futsal tournament. This was the first time that the recently-formed team had played Futsal.

Futsal is played over 15 non-stop minutes on an indoor, hard pitch. It is a fast and furious game requiring speed, good technical ability and stamina.

Brent’s first match was against Highgate Rangers, the tournament favorites. Although the team fought hard and had several near misses they ended the game with a four goal deficit and a consolation goal scored by Willow Stone.

Getting used to the pace of Futsal in the latter stages of their match with Highgate helped Brent in their second and final game against Escolla.

Brent reorganised and adjusted their tactics, playing quicker out of defense with Tallulah Swaby pushing the ball forward at pace to Sophie Owen up front who scored a hat trick. Eabha Kennedy - assisted by Willow Corbett and Alba Summer - scored a brace and at 5-0, Escolla finally managed to beat Hannah Derks in goal who had made several fantastic saves. Finally after being very influential throughout, Nancy Wales also got on the score sheet with an assist by Minnie Palmer. Brent ran out 6-1 winners to end an enjoyable first tournament in second place and with the runners’ up medals.

Brent coach Steve Swaby commented: “I am very proud of the girls. Given it was the first time they have played Futsal they did brilliantly”.