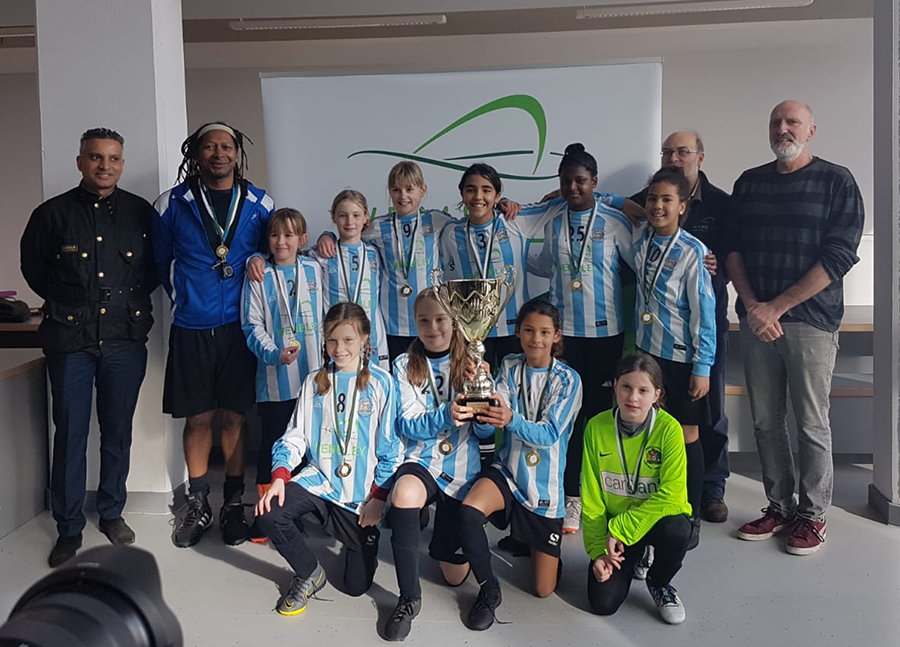 Brent's Under-11 Girls squad participated in the Wembley Cup, a tournament hosted by Wembley National Stadium Trust at the Ark Academy School. The event was well attended, with many local teams challenging to win the trophies on offer across three age groups.

Brent U11 Girls played four group games, winning three and drawing the other, scoring 10 goals and conceding none. Their unbeaten record saw Brent advance to the Final, where they would meet Hanwell.

Brent began the decider cautiously, playing against an opponent with whom they had drawn 0-0 during the group phase. The deadlock was broken by Sophie Wales, scoring her sixth and closely followed by her seventh goal of the tournament which would be enough for her to secure the Golden Boot.

Just before half time, Eabha Kennedy who had provided many of Brent’s goals in the earlier matches, again provided an assist, enabling Evie Roe to score her first goal of the tournament.

At half time, Brent were 3-0 up and came out in the second half determined to build upon their commanding lead.

Hanwell pushed forward looking for a gap in the Brent defence but joint captains Tallulah Swaby and Scarlett Hunn kept them at bay.

Brent then created an explosive counter attack; Zoey De Sousa Mantas in midfield released Kennedy down the wing who crossed for Roe to neatly tap in.

Brent continued to apply pressure and from a resulting corner Tashelle Redhead gathered up a lossed ball, which she passed back to Roe who lashed it in to complete her hat-trick.

Hanwell pushed forward seeking a consolation goal but were thwarted by a fine save by Kali Bulik. Bulik swiftly distributed the ball to Hannah Derks who in turn laid the ball into the path of Kennedy for her to score her fifth goal of the tournament and also claim the tournament’s Most Valuable Player award.