U12 Girls go 7 up in effervescent performance 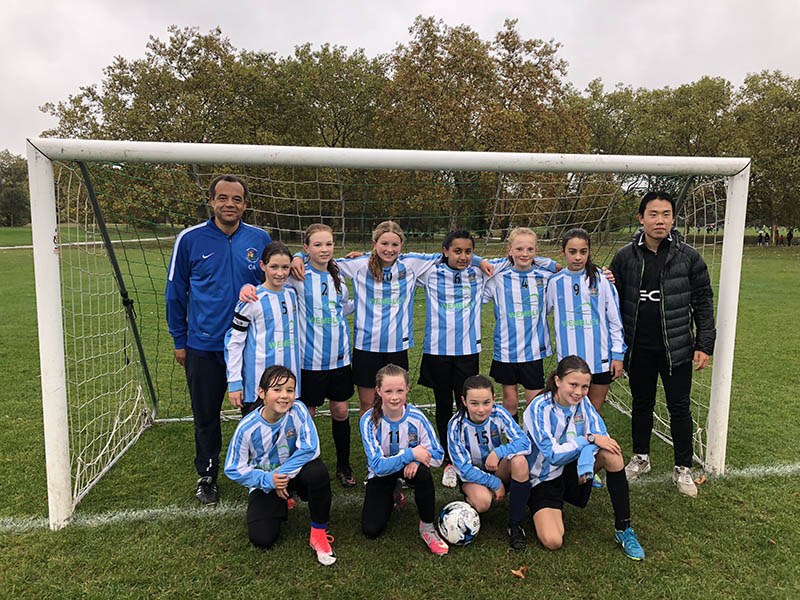 The Brent Under-12 girls team continued their great start to the season with an impressive passing performance against Regents Park. In a hotly contested game played in cold and rainy conditions at Regents Park, Brent showed real composure to out-pass their opponents in a game  that was not as one sided as the 7-0 score line might suggest.

Leading goalscorer Scout Waddington opened the scoring with a fierce left footed shot into the bottom corner. Waddington then turned provider for the second, releasing Giusseppina Carnavale on the left. Carnevale crossed to the far post and Chloe O’Donoghue showed great technique, volleying the ball into the roof of the net. It was all Brent as Laiba Mir, Waddington and O’Donoghue combined; this time to release Apolonia Margetson who broke from midfield to calmly fire into the net to make it three. Quick passing from Carnavale on the wing inside to Margetson then found O’ Donogue who unselfishly released Waddington to blast home the fourth on the stroke of half time.

Brent rang the changes at half time switching Tirion Lewis to centre forward and playing Keely Dibley-Dias in goal. O’Donoghue started the half brightly with a superb shot that flew inches wide of the far post.  Lewis then dribbled past her marker to score a well taken goal to make it 5-0. Regents Park then showed real spirit as they tried to make a comeback and broke on the counter attack, only to be foiled by a superb point-blank save by stand-in in keeper Keely Dibley-Dias. When Regents Park broke again, Brent’s Sophie Kew intercepted and her pass found  Giuseppina Carnavale who scored with a superb long range strike. Kathleen Santos Ferreira was then brought on and the skilful striker made an instant impact, dribbling into box and in the goalmouth scramble that followed Maya Rosenberg completed the scoring with a snap shot. Brent  dedicated the win to Raya McIntosh who had to withdraw from the squad after a nasty bang to the head.  Coach Chris Ampofo commented “The team spirit in the group is brilliant. They all get on and work hard for each other. Raya would have enjoyed today. We all hope that she gets over this knock quickly and feels better soon”.

Elsewhere, Brent's Albi Alexander scored the goal of the game with a thirty yard left footed drive that cannoned in off the bar but it wasn’t enough to stop the Under 14 squad going down 6-3 at home to Camden & Islington. Brent Under-13 boys fought bravely but were overrun by title holders Camden, eventually going down 8-2.