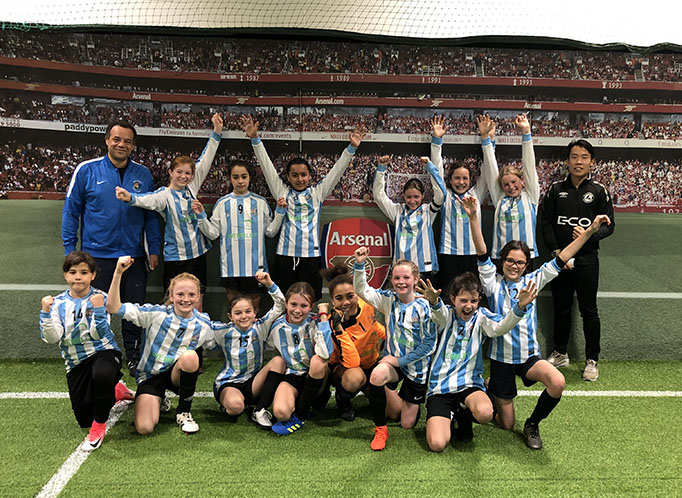 The Brent U12 Girls squad put on a first class team performance against a strong Arsenal side at the Arsenal Hub at the Emirates Stadium.

Scout Waddington showed why she is the team’s top goalscorer scoring four in Brent's 5-3 victory.

Brent started strongly but Arsenal took the lead with a well worked goal. Waddington then leapt into action intercepting a loose pass before smashing the ball into the top corner to level the score.

Brent then piled on the pressure. Apolonia Margetson tackled in midfield and passed to Chloe O’Donohue who hit a screamer inches wide. Then, Brent captain Giusseppina Carnavale burst into the box to shoot but the Arsenal 'keeper produced a fine save. Arsenal regained the lead with a counter attack to make it 2-1. Played at a high tempo, the match stepped up a gear as both teams fought for the all-important next goal. Arsenal broke and for once got past defenders Sophie Kew and Kirsty Dibley-Dias but keeper Milly-May Blue made a reflex save, diving to her right. Then, on the stroke of half time, Waddington showed strength, holding off her marker before rifling the ball into the net making the half-time score 2-2.

Arsenal started to pass well and pushed forward from the restart and they regained the lead with a long range shot. Brent responded superbly, drawing level after a great passing move involving Dibley-Dias and Carnavale who released Waddington to equalise with a thunderbolt from the edge of the box.

The game opened up with both teams moving into all-out attack mode. Brent went into the lead for the first time when Raaya McIntosh passed to Laiba Mir in midfield. Mir found Scout Waddington on the edge of the box and she outpaced her marker to coolly shoot into the net. The scoring was completed when Carnavale drove the ball across a crowded box with such power that it ricocheted into the net 5-3.

Brent coach Chris Ampofo said afterwards “The team showed great character and courage to come back three times. A huge thank you to Arsenal for giving Brent the opportunity to come to the stadium. It has been a great experience and the team really enjoyed themselves.”

Brent next face Queens Park Sharks in a top of the table clash at Regents Park on December 1.