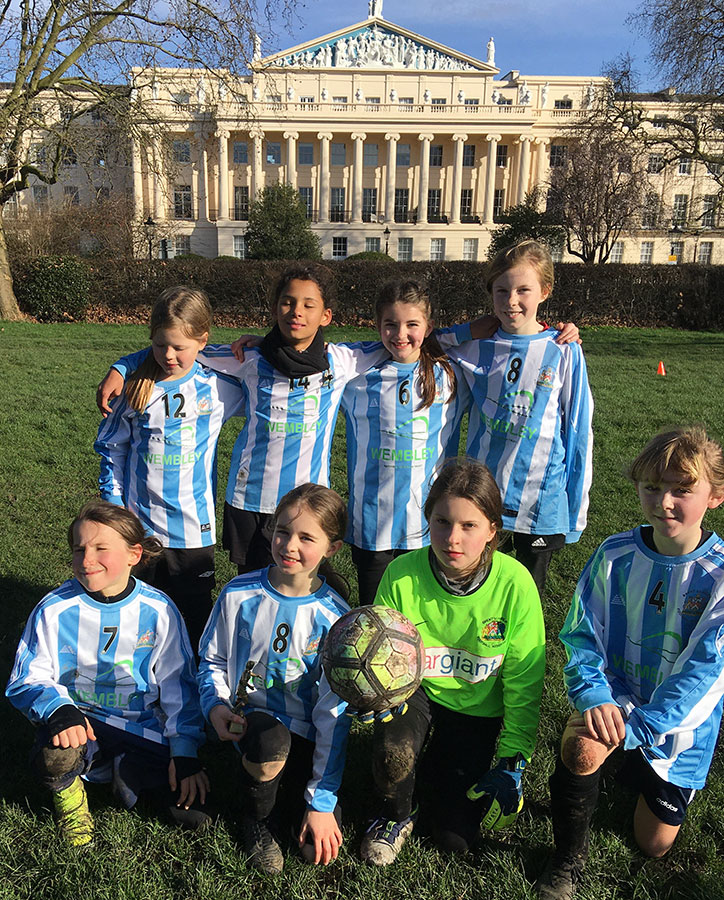 Brent's youngest Representative Squad secured a hard-fought win against Galaxy All Stars. The match was played in bright sunshine, against a backdrop of stucco fronted mansions in Regent's Park.

The previous meeting of these teams had been a 2-2 draw and Brent went into this fixture missing their star striker Sophie Owen who was injured. With other key players missing, including Carrie Rattigan, Hannah Derks and Alba Summers, the team had to dig deep to maintain the high standards set in previous games.

Bulik in goal was solid and Tallulah Swaby and Minnie Palmer in defense were virtually impenetrable. However, having enjoyed the majority of possession, Brent were caught napping by a counter-attack and Galaxy took an early lead.

After struggling to contain Galaxy, the midfield of Nancy Wales, Willow Corbett and Eabha Kennedy grew into the game. The trio combined to press the Galaxy defense and after a Kennedy shot was saved by the 'keeper, Willow Stone was the quickest to react and fired a powerful shot into the goal.

The score was 1-1 at half time but the pressure and the possession was all with Brent at the break.

The second half saw Galaxy bring on solid midfielders and a good back line but Brent continued to press. Kennedy and Chemale in midfield went close to scoring several times, drawing excellent saves from the Galaxy goalkeeper.

The deadlock was broken by a superb solo run down the left wing by Nancy Wales. The mercurial midfielder evaded her marker and thumped a glorious shot high into the roof of the net.

After Brent took the lead, they closed out the game with Corbett replacing Chemale in midfield and stopping everything coming her way. Behind her, the defensive pairing of Swaby and Palmer continued to play affectively, so much so that Palmer was declared Player of the Match. Bulik in goal was cool and calm and distributed well.