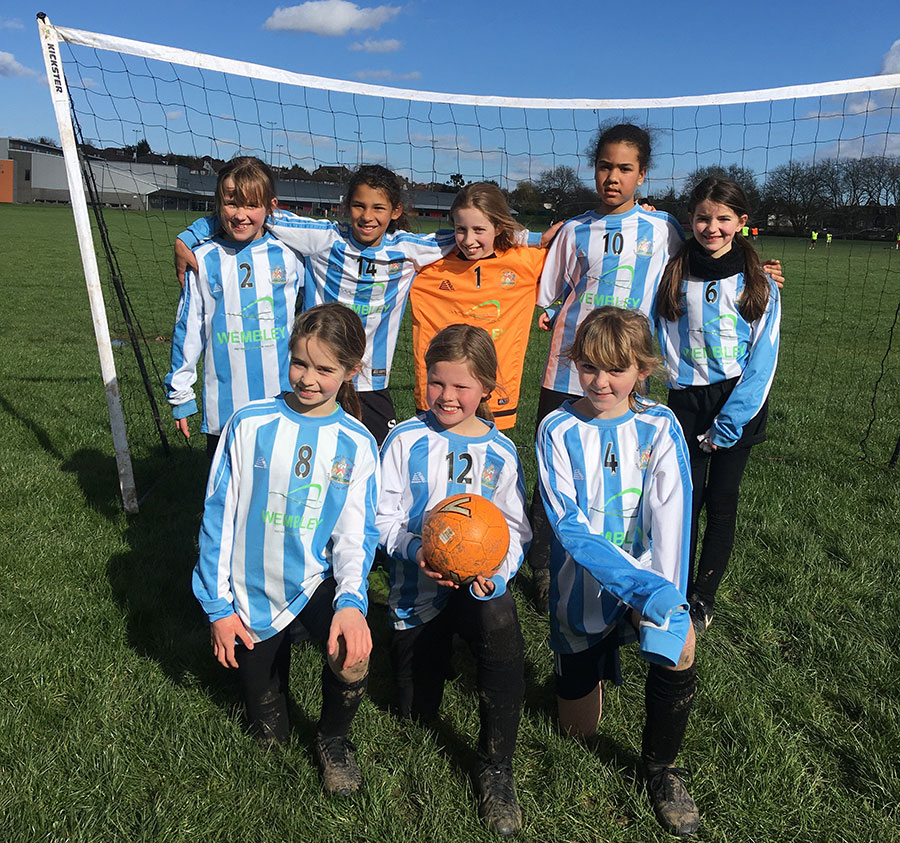 The Brent Schools FA U10 Girls defied the weather to take on Pitshanger FC at King Edward’s Park, Willesden on Sunday 1st March.

The game started ominously for Brent with Hannah Derks in goal being called upon to make a save within the first minute. Shortly afterwards Pitshanger, who had not lost all season going into the match, took the lead. The visitors scored with a powerful long-range strike that went through the Brent defense of Minnie Palmer and Tallulah Swaby and beyond the left hand of Derks.

Within ten minutes, Brent’s Willow Stone leveled the scores, running through the Pitshanger defense and calmly slotting the ball past the ‘keeper. Stone was on the ball again two minutes later, receiving a beautiful through ball from Sophie Owen and slamming the ball past the goalkeeper for Brent to take the lead.

With two assists from Alba Summers and another soaring dash from the half way line, Stone continued scoring, and by the final minute of the first half had scored all five of Brent’s goals.

At that point, Brent suffered a blow. Midfield dynamo Nancy Wales, who had recently returned to the squad after injury, was caught badly and fell, twisting her ankle and ending her involvement in the match.

Pitshanger were determined to pull a goal back before half time and duly did so with a quick interchange of passes which allowed their forward to hammer the ball home.

For the second half, Pitshanger rearranged their defense in an effort to contain Stone. However, Sophie Owen worked in tandem with Derks who was now on the right wing and Ana Chemale on the left and was able to keep the supply of passes to Stone going. Though the Pitshanger defenders were strong and technically good, they were unable to hold back Stone who rapidly scored a further two goals to take her tally to seven.

Swaby moved from right back to right wing and was able to use her pace to tear through the Pitshanger defence. One run saw Swaby unleash a powerful shot which beat the goalkeeper, only for Stone to poach the goal by tapping it in on the goal line. Having scored eight goals, Stone was withdrawn and continued to support the team from the sidelines.

Pitshanger continued to push forward and were unlucky not to score from several attempts on goal which were ably intercepted by Willow Corbett, a rock in the centre of midfield. The Brent defence was challenged continually for a sustained period of time before a speculative long range shot from the Pitshanger number 7 flew into the top right corner of the net.

With Brent leading 8-3 but playing into the wind and ten minutes remaining, Pitshanger sensed a possibility to overcome a large deficit and threw everything into going forward to seek another goal. This was not to be; Swaby continued to torment the Pitshanger defence, this time squaring the ball for Chemale whose hard work in midfield was rewarded as she thumped home a glorious goal from the edge of the box. The game was played out with several chances for Brent with Derks, Swaby and Owen going close before the final whistle blew.

The Under-11 Girls squad had a difficult match against Hackney in the London Girls League. Taking on one of the tournament favourites, Brent were 5-1 down at half-time but rallied in the second half. However, Hackney ran out 7-1 winners.