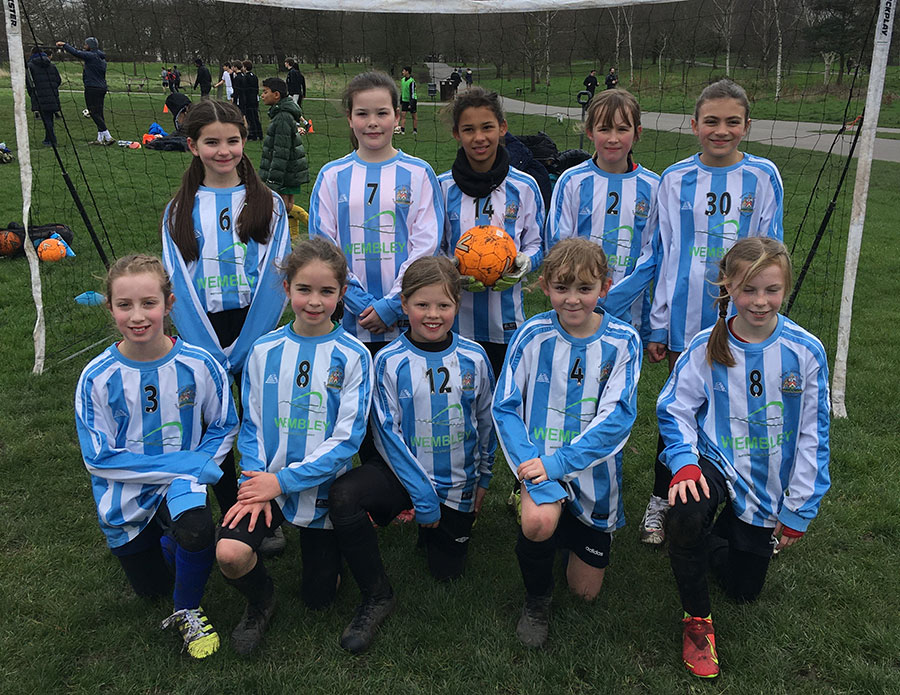 Brent's Under-10 Girls squad took on a very strong Wealdstone team on a heavy pitch at Regent's Park.

Brent went into the match missing key players Nancy Wales and Sophie Owen and were pegged back by their opponents in the early stages. Brent's defensive partnership, Tallulah Swaby and Minnie Palmer, had to work in tandem from the first whistle to keep the Wealdstone strikers at bay. Hannah Derks in goal was called upon several times and calmly gathered up every loose ball.

However, the match was not 'one way traffic'. Willow Corbett was playing the anchor role in central midfield and attempted to create opportunities for prolific striker Willow Stone.  Both defences were well organised and neither side was able to get a breakthrough before the half time whistle.

Brent used the interval to make full use of their squad, bringing on Ana Chemale and Eabha Kennedy on the left and right wings respectively. At the same time, Alba Summers moved from midfield and replaced Stone upfront as Brent aimed to put pressure on the Wealdstone defence.

Wealdstone had a lot of possession but were nullified in the final third by Carrie Rattigan who had moved to left back and the indomitable Palmer, who was as solid as ever at the back and helped to create the only goal of the game. It was Palmer's threaded ball which found Kennedy, who unleashed a thunderous shot at goal. The shot was parried into the path of Summer who was able to tap it in for her first goal of the season.

In the final minutes, Brent played exceptionally well under sustained pressure to close out the game, with Kennedy, Corbett and debutant June Acher-Johnson working collectively to form a solid partnership in midfield.