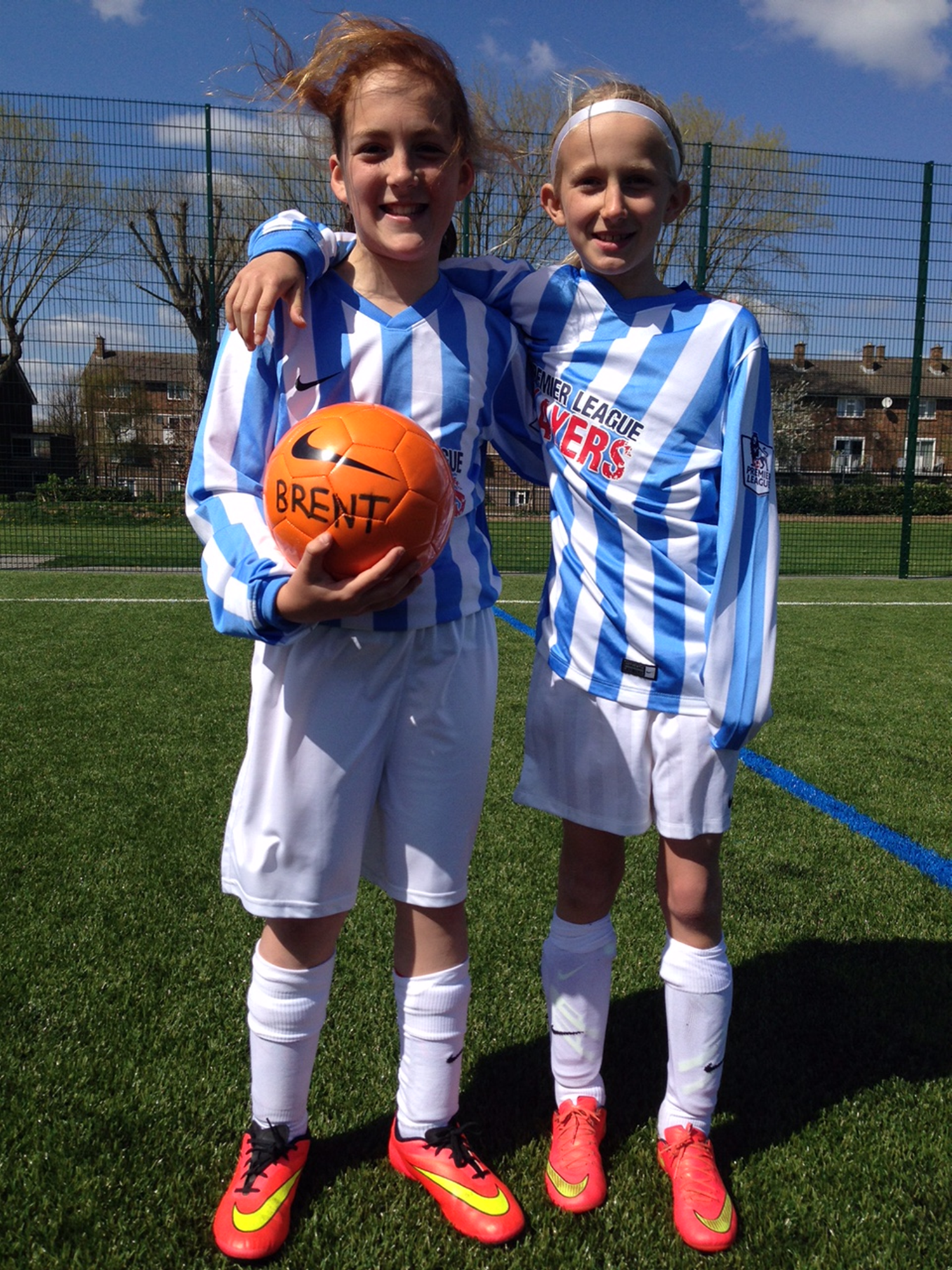 Saturday 18th April saw Brent Girls create history as they won their first ever match.  Having been so unlucky in their first friendly against Barnet, this was the day that everything clicked.

However, it looked initially like it was going to be a really difficult day as Dagenham controlled the first 10 minutes.  Had it not been for some excellent last ditch challenges from Emillie Driscoll-Mooney, Ciara O’Rourke and three incredible saves from Kiara Miller, Brent could easily have been behind.  But Brent then started to get back into the game as Lauren Thompson was unlucky not to break the deadlock after a great throughball from Millie Glover.  On 16 minutes, Brent Captain O’Rourke after making another great challenge on the edge of the area, ran the full length of the field, skipping past four challenges and squaring to an unmarked Susan Uwaifo.  The birthday girl turned sharply and planted the ball into the left hand bottom corner of the net to give Brent the lead, 1-0 Brent.  Dagenham equalised four minutes later as their striker raced on to a through ball and gave Miller no chance in the Brent goal.  However, Brent had been on top since the first goal and this continued as Tyanna Tulloch on the right and Noelani Agyeman on the left tormented the opposition defence.  It was no surprise when Brent went ahead again as Tulloch flew past her defender and delivered a perfect centre for Glover to score her first Brent goal.  2-1 Brent at halftime.

The first 15 minutes of the second half saw why these Brent Girls should not be underestimated this season by their more experienced counterparts.  Jasmine Warrington Mainoo joined the outstanding Driscoll-Mooney in defence and suddenly their star forward was finding it impossible to get anywhere near the goal.  With O’Rourke controlling the game from the middle, Jada Pollendine and Edie Surman were flying past their opposite numbers at will and Glover was desperate to add to her tally.  On 28, Surman beat the defender again before squaring to an unmarked Glover.  Her clever first touch saw her take it away from the defender before placing it coolly past the Dagenham goalkeeper.  3-1 and Dagenham were barely able to get the ball.  The intensity continued as the bumper crowd of parents and Brent coaches raised the noise and the whole team was getting in on the action as the move of the match lead to Brent’s fourth goal on 32.  Miller rolled the ball out to O’Rourke who played it right with her first touch.  Warrington Mainoo controlled and played it down the line to Pollendine.  She went past her marker on the halfway line before switching the ball to Surman on the left.  Surman played a quick one-two with O’Rourke before smashing in from a tight angle.  A great team goal that everyone on their feet applauding.  Dagenham were now really on the back foot as Surman’s next run on 35 saw her cross to the back post where Glover was waiting to smash a stunning volley into the top corner from 10 yards out.  Brent were running riot now and on 39 minutes, Pollendine got in on the action as she cut inside and curled a beautiful left-footed ball towards the back post.  It was missed by everyone and nestled nicely into the corner. 6-1 Brent with just over ten minutes still to go.  It was a hot day and with five of the girls having played a match for their other clubs earlier in the day, it was little wonder they eventually tired.  Dagenham had a bit more of the ball and pulled back a consolation goal with four minutes to play.

Final score Brent 6-2 Dagenham and it was a day that will live long in the hearts and minds of all that were there.

Delighted Manager Minesh Randeria said afterwards about the 15 minute blitz that saw Brent score 4 times - “That was one of the best footballing performances I have seen – the intensity, the work-rate and the desire to get the ball back was incredible."

“It was our work off the ball in the second half that impressed me most – we worked so hard to get it back and then the quality once we had it back was outstanding.” Ronan O’Rourke  - Brent Girls U11s Coach.