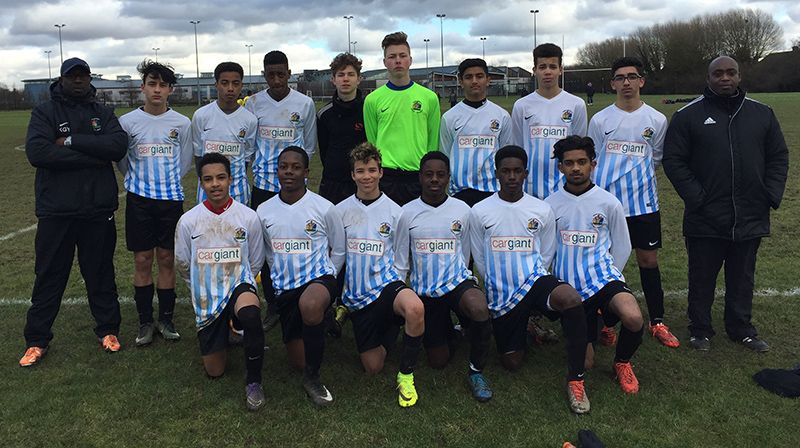 The Brent U15 squad resumed their league campaign with a 7-2 home win against Haringey U15, with Felix Amoah, Dominic D’Souza and Saul Mensah each scoring twice. The match - Brent's fourth Star Shield victory in succession - was preceded by a minute’s silence for Quamari Serunkuma-Barnes, who died the preceding Monday after he was attacked outside Capital City Academy in Willesden.

Both sides began slowly with neither team being able to control the game and it took until the 10th minute for Brent to have their first effort on goal through Amoah before Brent’s Kahlil Francis saw his effort on goal deflected wide. Haringey saw their first effort on goal from a free kick go high over the Brent crossbar. But just one minute later from another free kick Haringey took the lead in the 15th minute with a spectacular effort from 25 yards out that went in just under the crossbar.
Javarn Bernard went close to equalising within a minute but saw his effort well saved by the legs of the Haringey goalkeeper. From the resulting corner, Rahul Bhundia saw his header go over the Haringey crossbar. Brent continued to push forward and forced a couple of corners in succession before Mensah, D’Souza and Amoah all saw their efforts on the Haringey goal well saved.

Brent equalised in the 32nd minute when Amoah’s cross from the left was met by D’Souza who scored with his left foot from just outside the Haringey 6-yard box. William Ribeiro went close to putting Brent in front before half time but he saw his effort on target saved.

Brent started the second half strongly with Mensah seeing his effort blocked before Francis saw his powerful drive from 25 yards pushed onto the crossbar and over for a corner. Brent took the lead in the 50th minute when Amoah played in Mensah who finished with a well-placed shot into the bottom left corner. Amoah almost extended Brent’s lead within seconds, bursting through on goal.

Brent scored their 3rd goal in the 58th minute breaking quickly from a Haringey corner and Mensah scored his second goal of the game finishing brilliantly after Amoah’s superb pass.

Three minutes later Amoah deservedly got his name on the scoresheet with an exquisite lob from fully 20 yards out before Haringey pulled a goal back in the 63rd minute. Bernard made it 5-2 on 69 minutes with a spectacular shot after waltzing past 3 Haringey defenders and hitting the ball onto the roof of the net.
Mensah was the provider for Amoah who scored Brent’s 6th goal on 73 minutes before Mensah provided another assist for D’Souza to score his second goal of the game to make the final score 7-2.