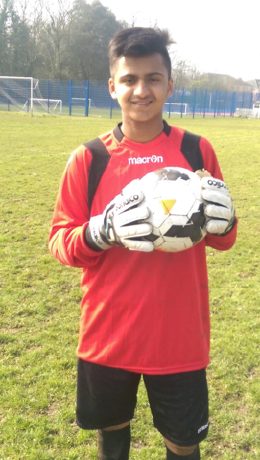 Claremont student Yashil Kamdar (pictured) made an outstanding debut performance in goal to earn Brent’s Under-15 side a point against high flying Barnet.

Brent also had opportunities to win the game.  Midway through the first half, Elgi Mayonika played in Wiktor Wachala who chipped the keeper but the ball rolled just past the upright. In addition, Cai Burrows went close with a free kick and Mohamed Elmabarak shot just wide.

At the other end, Karan Patel, Gareth Balakomoso and Mayonika all made last-ditch tackles to deny Barnet and Kamdar was on hand to make a string of superb saves.  Barnet hit the crossbar twice but, couldn¹t find a way past the ‘hero of the day’ Kamdar and the final score remained 0-0, with Brent the happier of the sides. Brent coach Ian Brathwaite commented “It was a great team effort. The debutants and players returning to the squad did themselves proud".

Brent blast their way into Final 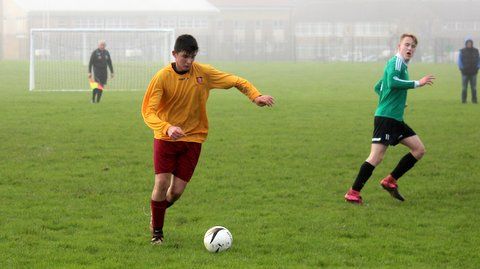 Brent’s U16 Representative Team played an away game in the semi-final of the London Cup against Croydon on Saturday 23rd January 2016.

The game began with a Brent backline of Kai Watts (Goalkeeper), Calvin Osbourne, Henry Marku, Joseph Griffiths, and wing-backs Dylan Singh and Rory Carlson. This defensive unit was tested early in the game, as Brent were being harassed and harried by a strong Croydon attack. The frantic pace of the game allowed Croydon to gain possession of the ball and the home side were soon dictating play.

Brent's play improved as the half went on but Croydon were taking full advantage of the visitors’ sluggish start, creating problems for Brent team. However, Kai Watts made some stunning early saves to keep his team level. Eventually, Brent began to gain some control and the midfield of Karmani Thomas- Lyttle, Jordon Green (captain) and Dean Toddington were all using the ball well and starting to get Nick Constantinou and Shaquille Ishmael into the game.

The game ebbed and flowed from end-to-end and after a dubious offside decision saw an Ishmael goal chalked off, Croydon hit Brent on the counter-attack and took a 1-0 lead. The game continued in the same vein, with both teams competing and playing some good football on a very difficult surface. 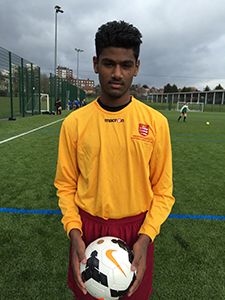 Eight players from Brent played for the Middlesex Schools' FA's Under-15 team on Saturday 5th March as they drew 0-0 with Sussex. Sateesh Selvaradjou (pictured) was impressive in defence for the Seaxes, whose 0-0 draw at Capital City Academy means that they remain in with a chance of qualifying for the knockout phase of the South-East England Schools' FA competition.

A full report from the match at Capital City Academy can be found on the Middlesex Schools' FA Website.

Brent's Under-13 Boys' side were also in action, travelling to Hillingdon in the Compton Cup, which is held by Brent. A close and exciting match was eventually won by Brent by two goals to one, with Brent's winner coming in the last minute.

The result means that Brent remain in contention for the championship, with next Saturday's match away to League leaders Barnet likely to be decisive. 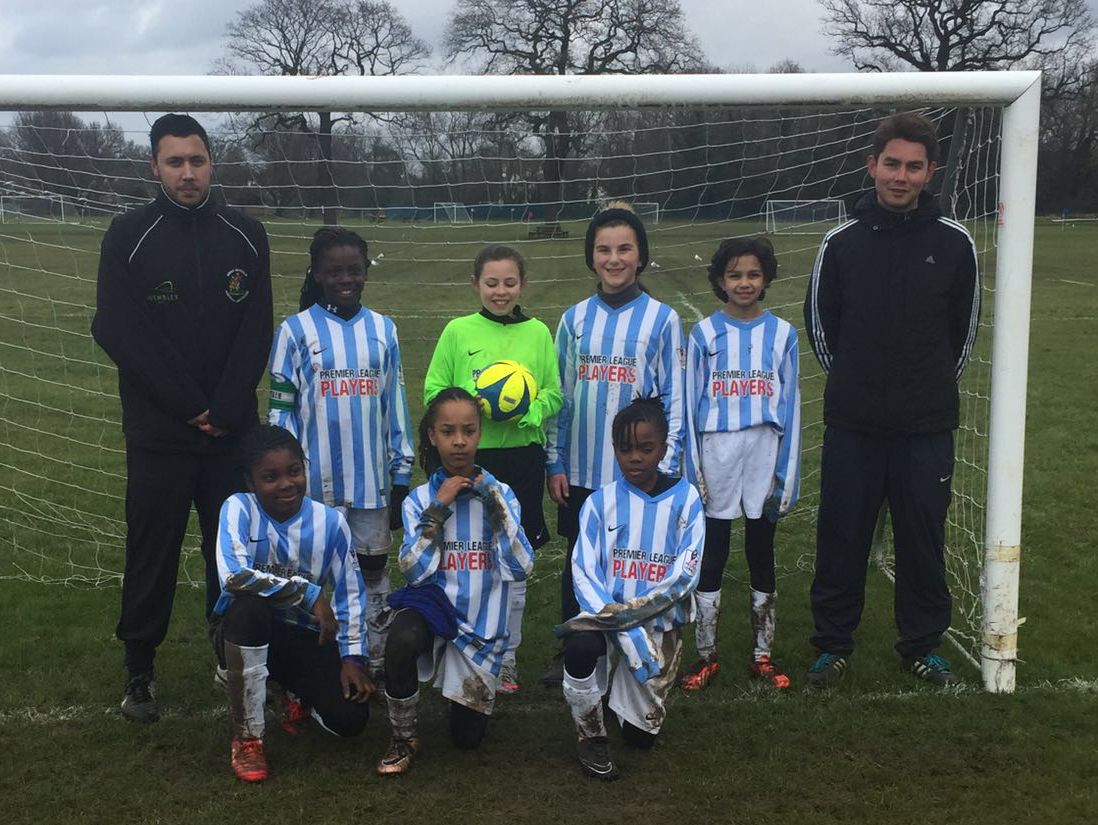 Brent Under-11 Girls were hoping to extend their 100% record in Group One of the London Girls’ League when they played their penultimate group game against South London. The side travelled knowing that a victory would see them secure their place in the Super-Six stage of the competition, where they would take on the leading districts from Group Two.

Brent started the match brightly, despite the muddy conditions, with Noelani Agyeman seeing two early, powerful efforts going just wide of each post in the opening two minutes. In the tenth minute of the match, Agyeman skilfully got past two defenders and drove a low ball across the box that was controlled by Maya Pires who produced an exquisite chip over the on-rushing ‘keeper to give Brent a deserved lead. For the rest of the half Brent continued to pepper the South London goal with a number of shots, but they couldn’t find a way past an inspired South London goalkeeper who was determined to keep her team in the game.

The second half began very differently to the first, with South London dominating possession and creating panic for Brent with every attack. Thanks to solid defending from Angel Acheampong and Jennifer Grey, two agile saves from Chloe Angell and a fantastic last ditch tackle from Nia Bowman, Brent managed to see out the opening ten minutes of the second period without conceding and began to find their rhythm again.

In the final fifteen minutes, Agyeman moved into centre midfield and controlled the pace of the game. With seven minutes left, Agyeman intercepted a ball just in Brent’s own half, drove into the open space and released a thunderbolt of a strike mid-way in South London’s half that took a slight deflection off striker Susan Uwaifo, to make the score 2-0. Agyeman started Brent’s very next attack, winning the ball on the right, going past the defender and saw her powerful effort parried into the path of Pires who headed home for her second goal of the game and Brent’s third and final goal. The match finished 3-0 to Brent who have won all three of their group games and have qualified for the Super-Six with one group game still to play. Coaches Joe Khalfi and Ronan O’Rourke were delighted with their Brent’s hard fought victory and Khalfi added, ‘To get through the opening ten minutes of the second half without conceding was crucial. It was a fantastic team effort and a well-deserved win that the score line makes look a lot more comfortable than it was. Their ‘keeper was outstanding today but our girls managed to go up another gear when they needed to which was excellent.’

Player of the match: Noelani Agyeman. Joe Khalfi  commented: “Noelani was magnificent today. She got an assist for every goal, covered every blade of grass with passion and could have got a couple of goals if not for the inspired South London goalkeeper.”