U11 Girls too strong for Highgate Rangers

The Brent Under-11 girls squad kicked off their season with a stunning 5-0 victory over Highgate at Regent’s Park.

Eabha Kennedy opened the scoring with a spectacular-long range effort. Captain Meg Ingham made it two, calmly slotting the ball home from inside the box after skilful play by Nancy Wales.

Highgate broke forward on the counter-attack but Tallulah Swaby showed good pace, intercepting the pass and slipped the ball to Evie Row who found Eabha Kennedy in midfield. Kennedy made an inch-perfect pass to Sophie Owen who blasted the ball home to make it three.

Owen got in on the act again collecting the ball from Willow Robinson and dribbling through from midfield to score a superb solo effort.

Brent rang the changes introducing Scarlett Hunn, Tashelle Redhead and Willow Corbett and all three were involved in the final goal, combining well to find Nancy Wales in midfield and the mercurial Wales skilfully jinked past two defenders and passed to Owen who completed her hat-trick with a thunderbolt into the roof of the net.

Brent coach Chris Ampofo  commented: “What a great first game. This group have real spirit. It’s great to see so many talented players. They did the borough proud.”

U11 Boys in encouraging showing 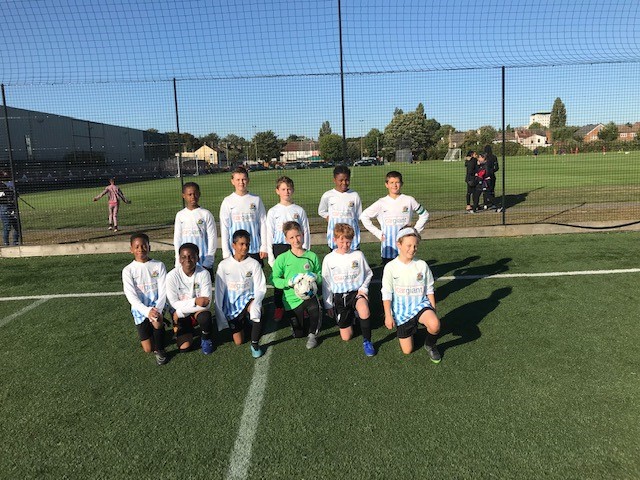 The Brent U11 Boys squad took part in an excellent tournament at the West Ham United Training Centre.

The boys played well against Stevenage, Wokingham, Lewisham and Barnet but unfortunately narrowly lost every game.

Things could have been so different as Brent hit the crossbar on 5 occasions and also saw hit the post in one match. The boys thoroughly enjoyed the occasion and hopefully will build on the experience in their match against Harrow.

Brent's Under-12 Boys got their season off to the perfect start with a convincing win over a team from the Arsenal Community programme.

Brent stated the game strongly and took the lead after only three minutes. Some quick, direct passes resulted in Danny having a shot on goal which the goalkeeper tipped over the crossbar. From the resulting corner, Bernardo managed to head the ball towards goal; the header was blocked and fell to Dion who placed the ball into the bottom left corner.

Brent managed to keep Arsenal Community in their own half and won the ball back on multiple attempts but were unable to capitalise until the 12th minute, when James managed to disposses a defender and score into the top left corner. After this goal Brent were dominant in possesion and added a third goal in the 18th minute, Bernardo scoring from a corner which was delivered by Adam.

The first half ended with a fourth goal for Brent, Danny winning the ball on the right wing and passing it to James who shot into the top left hand corner from outside the area.

At the start of the second half, Brent scored three goals in five minutes with Danny scoring all three. The first was a solo run past three players before dispatching his shot into the bottom right corner. The second was a free kick which Kalunge won and was hit hard into the top right hand corner. The third goal of this spell began with excellent passing down the left. The ball was played centrally by Dhyan and was slotted in by Danny under the goalkeeper's dive.

From the subsequent restart, Arsenal attacked in determined fashion and pulled a goal back, taking advantage of a miscommunication in the Brent defence.

Brent then made some positional and personnel changes and ended the game with a further four goals. Kulunge shot from a central position and found the bottom right-hand corner from the centre of the goal having received the ball from Dhyan; Adam shot from the left side in the 40th minute, beating the goalkeeper at his near post, having been teed up by Dion, who then scored himself by dispossessing a defender and putting the ball into the top right hand corner from outside the box. The final goal came from Bernardo who dribbled in from the left and placed his shot into the right hand side of the goal.

U10 Girls edge out Nightingales

Brent's Under-10 Girls started their season with an excellent 2-1 win over a strong Barnet Nightingales team.

Brent started strongly by blocking a shot from Barnet and hitting Nightingales on a counter-attack. Wales dribbled down the wing and released Owen, who shot first time to give Brent a 1-0 lead.

A flurry of chances late in the first half culminated in Wales hitting the bar and Brent took a 1-0 lead into half time.

Barnet pressed heavily in the second half and Brent did well to keep Nightingales at bay thanks to strong defensive work by Swaby and M. El-Hashimi.

Another counter-attack from Brent began with Stone passing to Wales. Wales set off on a dribble down the wing evading two defenders before hitting a shot which the Barnet 'keeper could only parry into the path of Owen who shot clinically into the top left hand corner to give Brent a 2-0 lead.

Brent had several more chances in the second half with Wales hitting the crossbar again and Owen forcing the Barnet goalkeeper to make several saves.

Brent conceded a corner with 10 minutes to go and from a deflection off Swaby, Barnet pulled a goal back. Brent soaked up the pressure in the last few minutes with good saves from Carrie and a strong defensive midfield contribution from Summers who was commanding in the centre and D.El-Hashimi in supporting the back three. Brent showed a lot of commitment and the girls were rewarded with a good win over a strong team.