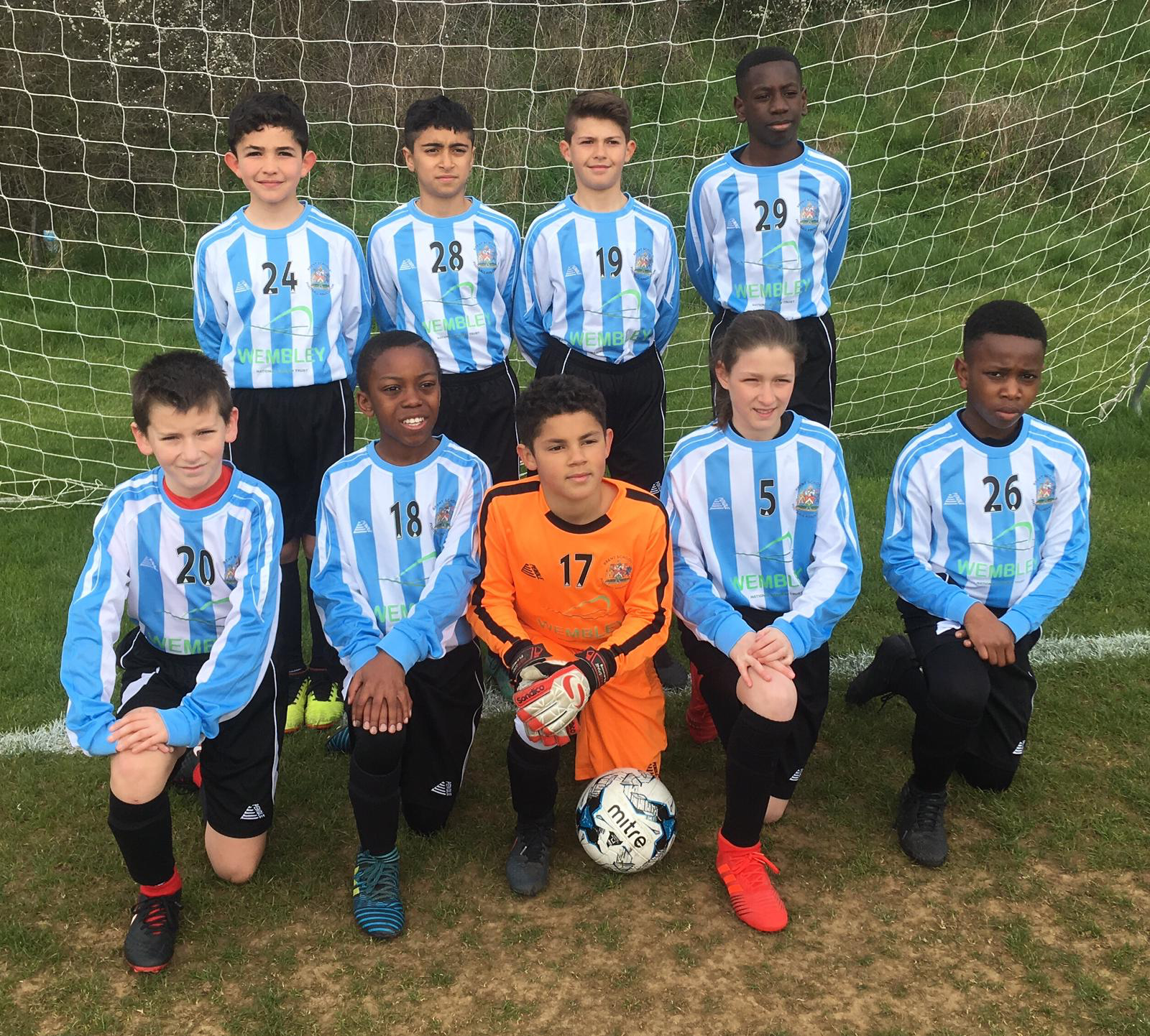 In an historic first, for the district Brent fielded a girl in a boys’ team. Fresh from leading the girls to three trophies, Brent girls’ captain Giuseppina Carnevale made her debut for the boys. Brent started quickly and soon Troy Kelly sped past the last defender heading towards goal. He shot towards the bottom right corner, but the goalkeeper touched the ball wide. However, Brent then took the lead as Kalungi Lovell received the ball from Armend Muslika on the right-hand side and cut in, hitting a shot into the top right corner. 1-0.

Brent looked for a second goal as Danny Gobishavi Por Asl played a through ball towards Kelly in a one-on-one with the goalkeeper, only to hit the post. Gobishavi then dispossessed a Stevenage defender and shot into the left hand corner but the ‘keeper touched the ball onto the post. The pace and dribbling of Carnavale was causing Stevenage all sorts of problems and just after the break she cut in from the left to play a ball to Danny who turned and shot from outside the box onto the right hand post. Brent continued to pile on the pressure as Armend Muslika  shot from distance but the ball dropped to Kelly who shot just wide of the target.

Soon after that, Danny headed just wide from a corner. Stevenage rallied but Brent held firm.

After the match, Brent coach Paul Woodford commented that: "It was a stylish performance form Brent who played with patience and finesse to control the game whilst new player Giuseppina fitted in seamlessly."

U12 Girls claim a Treble 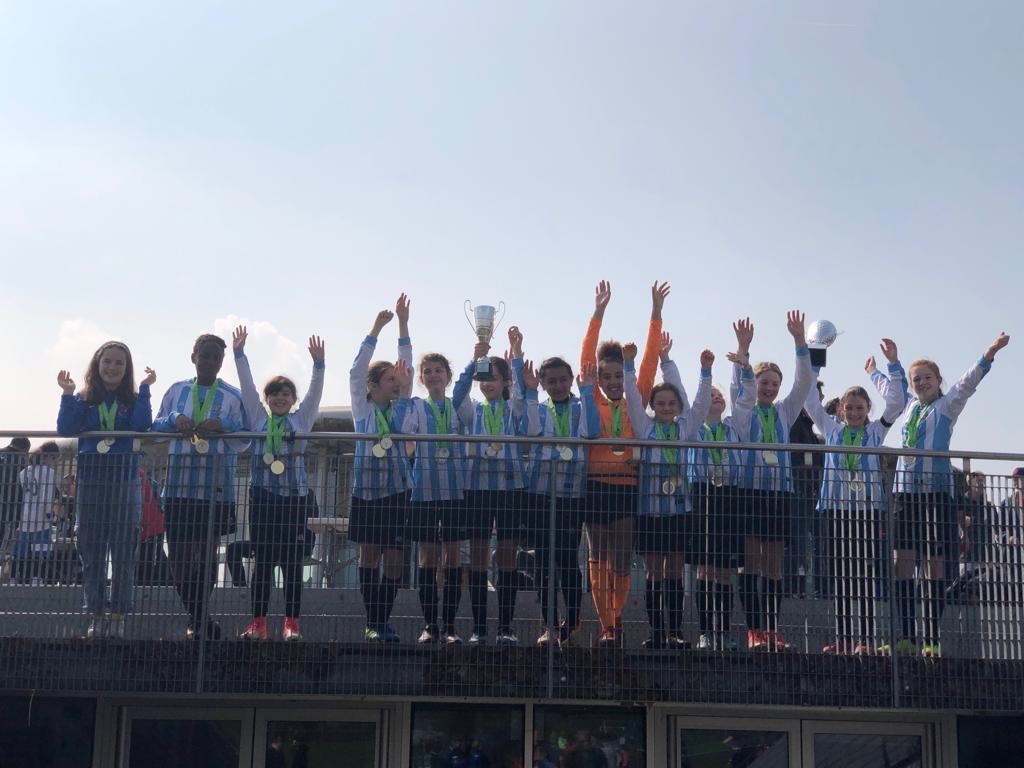 The Brent U12 Girls Squad’s terrific season continued as they won the Camden & Regents Park tournament.

Having already won the League and Cup double, Brent were the tournament favourites. This being the case, the girls were ‘the team to beat; and the reduced match duration of 15 minutes meant that the first goal was going to be vital and any slip up could turn a game.

Drawn in the tougher group, Brent faced Eagles United in their first match. Brent took the lead with a wonderfully worked team goal which culminated in Chloe O’Donoghue squaring the ball to Giussepina Carnavale to blast into the net. 1-0. Brent dominated possession but with two minutes remaining Eagles equalised with a long-range fee kick and much to the delight of the Eagles team and their fans, the match ended 1-1.

This ramped up the pressure for the second game against Dragons, with Brent needing a win to progress to the knockout stages. The league match between the two had been a tight game but with a semi-final at stake, Brent started the sharpest and Brianna Etiko opened the scoring after intercepting a pass.  Etiko scored her team’s second goal, finishing after excellent skill from Maya Rosenberg and the match was put beyond the Dragons when Carnavale found the net with a 25 year drive. Rosenberg was at the heart of the fourth and final goal, jinking between defenders before setting up O' Donoghue who curled the ball just inside the far post. A place in the semi-final was secure. When it was announced that the semi-final would be against the Brent Under-11 team there was some trepidation and rightly so. The Brent Under-11 squad were arguably the team of the tournament, having made the last four whilst playing a year up.   Pele, Livi, Kathleen Ferreira , Olivia and Keenda had all been outstanding and with Natalia on form in goal it was set up for a tough game.

Brent U11 dominated the game from the outset. It was end to end stuff as Keely Dibley Dias and Sophie Kew defended well and Milly May Blue bravely saved a certain goal diving to tip the ball past the post. Against the run of play, Brent U12 counter attacked and top scorer Scout Waddington showed great pace before launching a long range shot which squeezed just inside the post past the unsighted ‘keeper.

The other semi-final was also a tense affair with Queens Park Sharks eventually beating Eagles in a penalty shoot-out to set up a local derby in the Final.

Brent had won the previous encounter but Sharks are vastly improved under coach Pam Shores. The early stages of the games were tight. Giussepina Carnavale gave Brent the lead with a spectacular long-range shot. Brianna Etiko set up Chloe O' Donoghue to score the second before Carnavale capped a mazy run placing the ball into the corner to make it 3-0 at half time.

After the break Carnavale released Waddington for the fourth before Matilda Easterby combined well with Laiba Mir whose pin point pass found Waddington to make it 5 and Apollonia Margetson capped a great performance, completed the scoring with a brilliant volley from the edge of the box.

After the game Brent were presented with both the tournament winner’s trophy and that for the League Championship. Brent coach Chris Ampofo "The girls were brilliant today and they have been all season. All of the games were tough and they really rose to the challenge" He singled out the Under-11s for special praise.  "They were brilliant. It was toughest game we had today. Patricia Taylor is doing great job with them. It is great to see girls’ football in the borough developing so well. We now have three girls’ teams at Under 9, 11 and 12 and girls football is going from strength to strength".

Brent's next big game is May 4th when they will face QPR and local rivals Queens Park Sharks again  in the Brent Super Cup.

In boys’ football, the Brent Under-11 A team’s terrific run continued with a 2-1 victory away to Hackney in the Lester Finch Cup. Brent U11b battled bravely but went down 4-2 away to Letchworth.

U9 Girls draw with AC Finchley 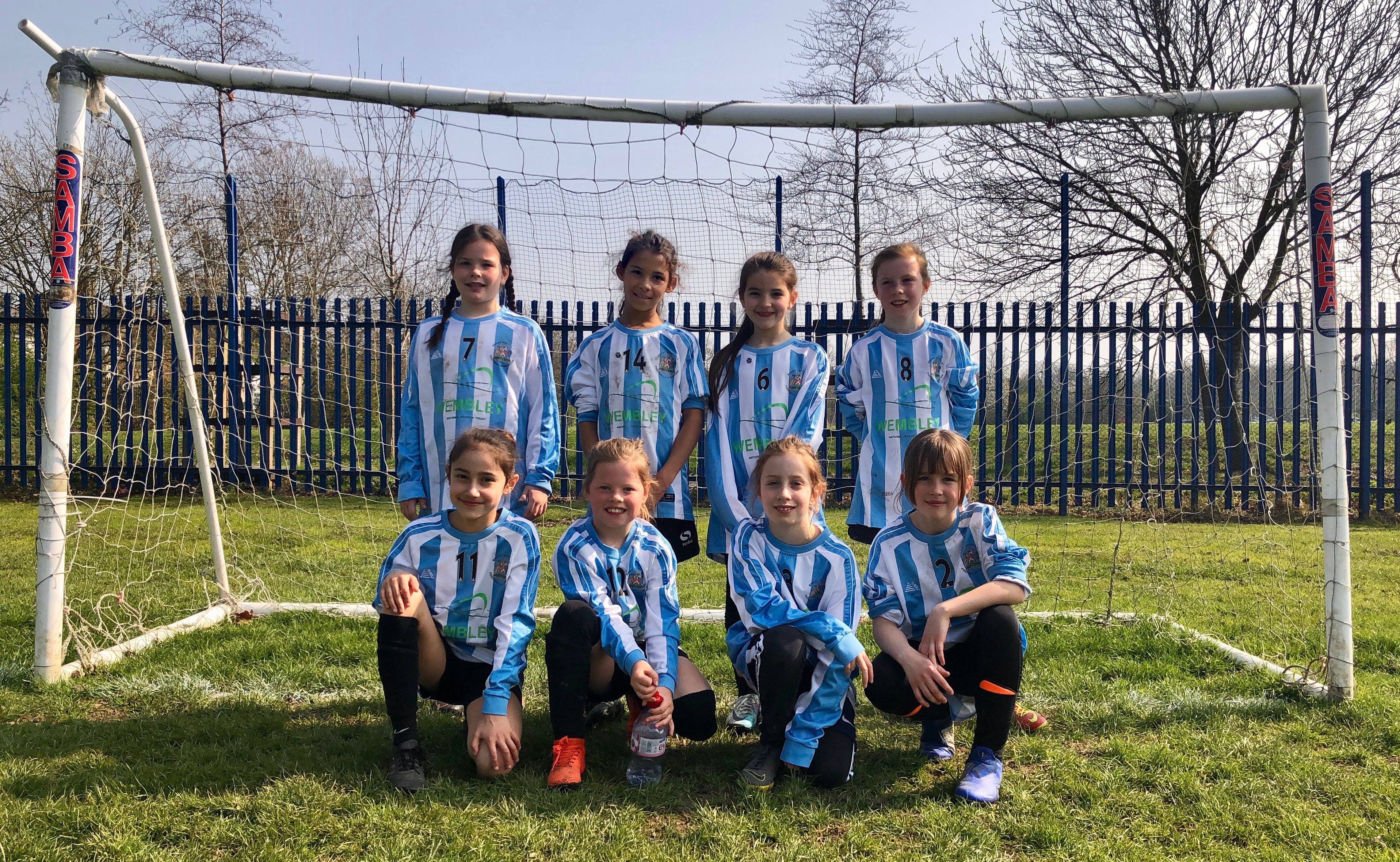 Brent’s Under-9 Girls’ team drew 2-2 against AC Finchley Central 'East' in what was the sixth Capital Girls League match for this newly formed team.

They showed great determination to draw the match after trailing 2-1.

Brent started brightly and came close to scoring first when Eabha Kennedy struck a powerful long-range shot against the post during the opening exchanges. Brent kept up the pressure and Kennedy went on to break the deadlock with a high shot into the roof of the net from inside the penalty area.

AC Finchley responded well, equalised and then went ahead with a second goal after the referee judged the ball to have crossed the line.

Brent didn't let that misfortune affect them and following a good throw in by Tallulah Swaby, Kennedy gathered the ball, dribbled inside and hit a superb shot into the left-hand side of the goal, scoring her 9th goal in 4 matches.

In the closing moments of the first half, Willow Stone's shot was parried away by the opposition keeper, and Stone was unlucky not to connect with the rebound. The first half ended 2-2.

In the second half, Brent lifted their energy and workrate once again and continued to attack and search for the goal to take them back into the lead. Alba Summers joined Kennedy in the attack and showed a good work rate to close down and pressure the AC Finchley defence.

Swaby and Carrie Rattigan marshalled the defence well and limited the opposition to only a few opportunities.

Brent were hungry for the winner and as the match entered the last five minutes Kennedy hit the crossbar from a fiercely struck free kick and in the dying moments of the game goalkeeper Hannah Derks made a marvellous save to her right and tipped the ball around the post to ensure Brent extended their unbeaten run to four matches.

The match was also an excellent opportunity for several Brent players to gain 'game time' experience. Suki Bell and Ana Chemale (making her Brent debut) both contributed to the team when called upon.

Brent stand-in coach Stephen Kennedy said after the game, "It's great to see this new team continue to develop, despite losing the lead, the girls showed great character and endeavour; on the balance of play in the 2nd half they deserved to win”.

Inspired by Brent hero Raheem Sterling, who scored a hattrick at Wembley the night before, Brent’s Under-12 girls added to the Camden and Regents Park League Cup to their league title, winning a tense encounter with Regent’s Park.

For much of the match, this Final was too close to call up and Brent led 1-0 going into the last 15 minutes. It was then that Brent's relentless pressure finally paid off and a late flurry of goals eventually gave them a 5-0 victory.

In an exciting encounter which was a great advert for girls’ football, Brent’s top goalscorer Scout Waddington opened the scoring when she received a superb cross from the right wing Chloe O’Donoghue and smashed the ball into the net.

Brent piled on the pressure, but the Regent’s Park goalkeeper made a string of fine saves. Although pinned back, Regents Park broke on the counter-attack and Brent ‘keeper Milly May Blue pulled off a superb save to keep her team in front.